How many times have you heard someone say “I don’t take over-the-counter (OTC) medicines.” or “I don’t like putting chemicals into my body.”? They may have had a bad reaction or sub-par results.  Honestly….I share the last sentiment.  That’s why it’s good to know that I can grow a pretty daisy looking plant in my yard to treat ailments from headache to asthma to toothache.

The feverfew plant (Tanacetum parthenium) is actually a species of chrysanthemum that has been grown in gardens for centuries. The first-century Greek physician Dioscorides used it as an antipyretic (something that reduces or stops a fever). In fact, ancient Greek physicians used feverfew to treat numerous maladies including fevers, migraine headaches, rheumatoid arthritis, stomach aches, toothaches, insect bites, infertility, and problems with menstruation and labor during childbirth. It was also known as “medieval aspirin” or the “aspirin” of the 18th century.

Feverfew is a small plant that is Native to southeastern Europe, although it is now widespread throughout Europe, North America, and Australia. It belonging to the family ASTERACEAE (daisy), and as such, looks similar to daisies with white petals and a yellow center, but they are smaller and tend to bloom between June and September.  The aromatic plant gives off a strong and bitter odor.  Any part of the plant can be used for medicinal purposes. Most commercial versions of this medicinal herb contain parts of the petals.  These are thought to be the most powerful part of the entire plant.

In modern times, feverfew is still used for a wide variety of complaints including menstruation maintenance, rheumatoid arthritis, psoriasis, and tinnitus.  It is also thought to be great for those suffering from stomach issues brought on from sickness as well. Presently, the most common use of feverfew in the world right now, is headaches.  Those who suffer from headaches or migraines regularly find that feverfew can provide relief in the severity of the symptoms and even get rid of the headaches or migraines entirely. 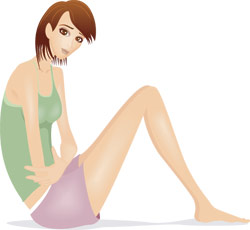 Menstrual cramps occur when the uterine lining produces too much prostaglandin, a hormone that can cause pain and inflammation. Because it can help limit the release of prostaglandin, feverfew can effectively lower inflammation, eliminate cramps, and induce calm to reduce mood swings and anxiety. While more research is required, there’s probably no harm in starting to take feverfew a day before you anticipate that your menstrual cramps will begin.

Rheumatoid arthritis is a chronic inflammatory disorder that typically affects the small joints in the hands and feet. An autoimmune disorder, rheumatoid arthritis occurs when your immune system mistakenly attacks your own body’s tissues. Feverfew has a long history in traditional herbal medicine of treating arthritis pain and inflammation which makes it ideal for the natural treatment of rheu

matoid arthritis inflammation. Studies have been mixed: some found that feverfew did not work any better than placebo in improving RA symptoms while others suggested that at larger doses (100–125 milligrams), feverfew might have some benefit for rheumatoid arthritis.

Psoriasis is a common, chronic, genetic, systemic inflammatory disease.   It is characterized by skin cells that multiply up to 10 times faster than normal. As underlying cells reach the skin’s surface and die, their sheer volume causes raised, red plaques covered with white scales. Psoriasis typically occurs on the knees, elbows, and scalp. It can also affect the torso, palms, and soles of the feet. The same ability to inhibit the body’s production of prostaglandins that makes feverfew ideal for the inflammation associated with menstrual cramps and rheumatoid arthritis makes it useful to treat inflammatory skin diseases such as psoriasis.

Tinnitus is a physical condition, experienced as no ises or ringing in the ears or head when no such external physical noise is present. Tinnitus is usually caused by a fault in the hearing system; it is a symptom, not a disease in itself. Underlying conditions that can cause tinnitus include age-related hearing loss, ear infection, or a circulatory system disorder. Tinnitus can also be caused by injuries to the head or neck. Feverfew can remedy tinnitus because it can lower blood pressure which relieves symptoms such as dizziness, muscle tension, and ringing in the ears.

Most commonly, people reach for feverfew to treat headaches. Research shows that consuming feverfew reduces the frequency of migraine headaches and headache symptoms, including pain, nausea, vomiting, and sensitivity to light and noise. Feverfew treats the cause of the headaches rather than simply the pain; it is the combination of ingredients in the feverfew plant that brings such effective relief. It works to inhibit the release of two inflammatory substances, serotonin and prostaglandins, both believed to contribute to the onset of migraines.

Those unfamiliar with the world of herbal medicine – or those who are just getting into it – are often temped to take anything and everything whenever they feel like it, but herbal medicine is as balanced and important as pharmaceuticals is.  This means that you need to follow instructions for dosages to make sure that you don’t overdose.  You should always contact a medical professional before adding it to your diet, and stop taking it if you have a negative reaction such as swelling in the lips or other adverse reactions.

This is not something that should be taken by children under 2, and should not be taken by those women who are pregnant or breastfeeding, much like other herbal medicines and traditional medications on the market.

Feverfew can be a strong aid to those suffering from headaches and migraines who are looking for a variant on aspirin or other painkillers. This could be the right herbal medicine to make the difference for you!

Get Fitness and Nutrition Tips and Tricks Sent Directly to Your Inbox!